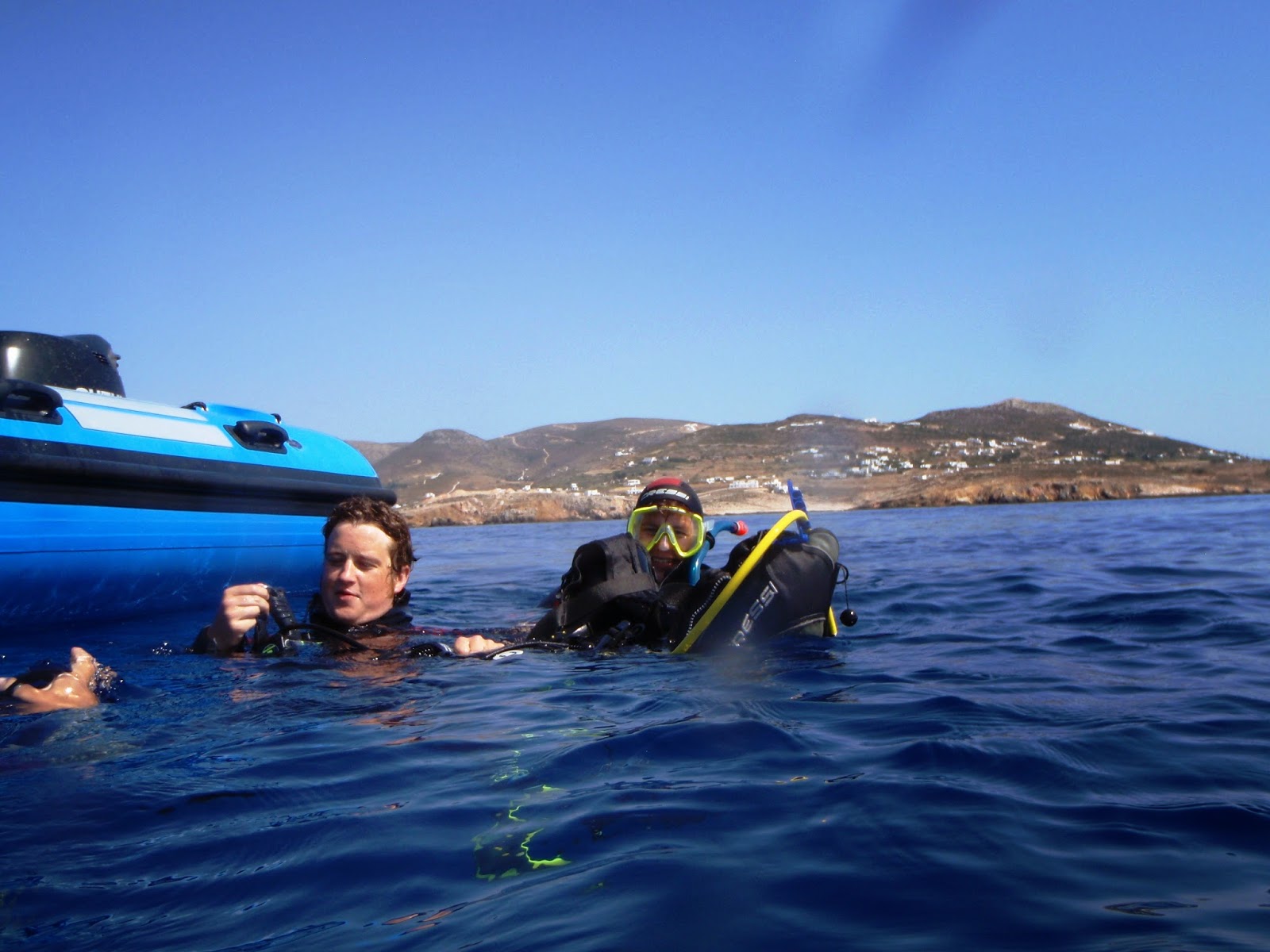 The real draw of diving in Greece is the inanimate stuff. Whether that means rocks or wrecks, there is a lot in store to explore. To give you a taste, what follows are three local dives I undertook during my Divemaster, in ascending order of interest. “Mick Jagger’s Lips” 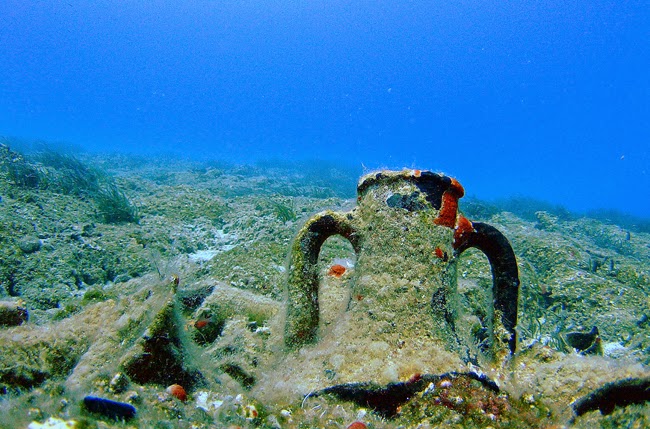 Back-rolling from the rib, we entered the clear, perhaps a little too refreshing, Aegean waters. Assembling and moving off, the dive route took us over a series of root-like ridges which stretch out from the south-eastern finger of the island.  Amongst the small fish, sponges and rocks, an alien shape caught the eye. Alien to the water that is. The symmetry of man-made object sticks out like a sore thumb under water.   First an isolated fragment, soon a scattering. The remains of ancient amphorae adorn the rugged sea bed, in places fused into the rock and covered in fire worms. The last clues of an age-old ship wreck, likely bashed up on the rugged shore by the fierce winds which rip through this region. An interesting dive and appetiser for the hundreds of more complete sub-aqua archaeological sites all over Greece. Plus, I have soft spot for “Pots” as it was my first ever dive in Greece. “The Cave” A small, seemingly indistinct island in the Parian channel hides an underwater secret. Dropping anchor at a barren inlet, we dived down and finned over to a 30 meter sea wall. The greater part of the dive was spent making our way along the vertical edifice, peering into nooks and crannies for scorpion fish and the odd moray. There was meant to be a big grouper lurking, but I didn’t have the fortune of meeting him. 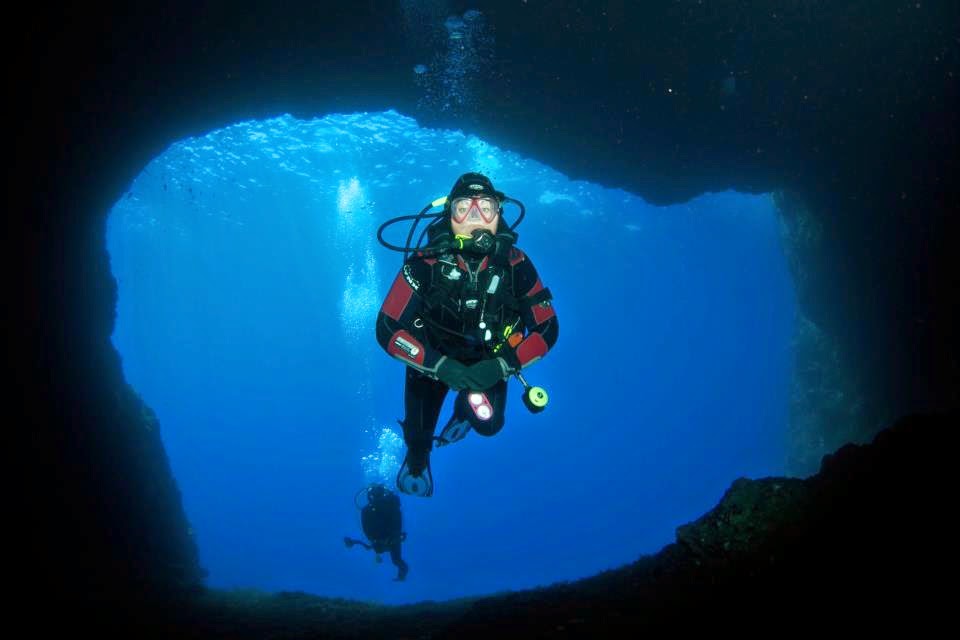 All of a sudden, 14 odd meters down, an opening appeared in the rock. Heading in one by one, we entered into a thin sub-aqua passage. Narrow and gently sloping upwards, it led on into darkness and the heart of the island. A circular silhouette gave away the end of the tunnel. It opened up into large cavern. Submerged stalagmites below, exposed stalactites above. Surfacing, we rested for an interval, listening to the echoes of the swell. On a rough day, the small band of air at the roof of the cave is compressed into waves of mist as the sea drives in and out of the cave. Something I would have loved to experience, but it was not to be on this day.   Descending again, we passed into an even larger chamber. Tube worms clung to the walls, gently sifting, but the scene was stolen by a vast window opening out into the blue, pimpled by shoals of small fish. That was our way out, back along the wall, to the surface and away.  “The Samina” A wreck and memorial to a disaster. I only dived the Samina once during my Divemaster, but it was the most thought provoking dive I have ever done. 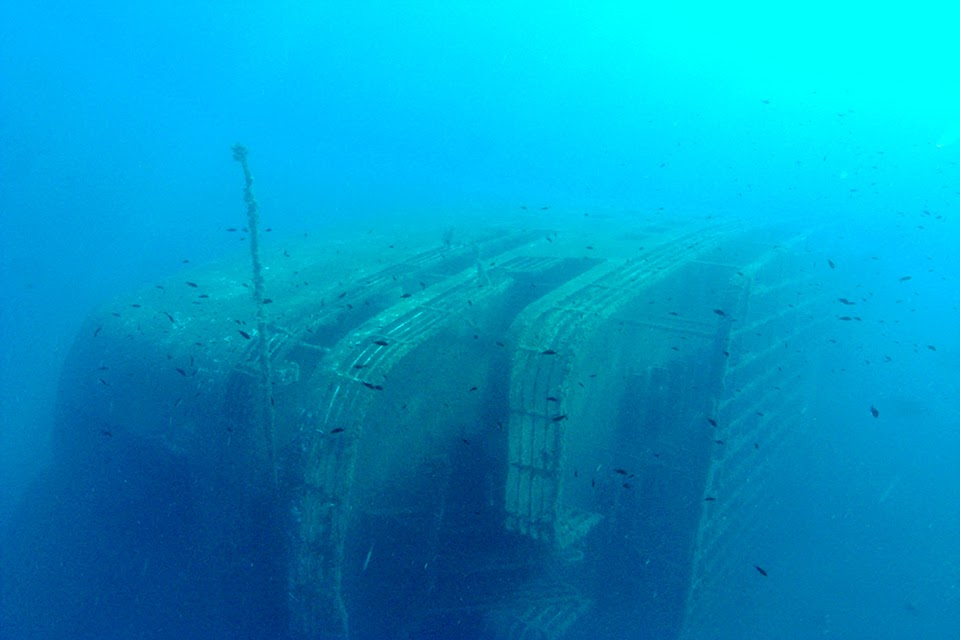 Having struck rocks – the Portes – on its way into Parikia, the MS Express Samina sunk with the tragic loss of 82 lives, including a number of locals from Antiparos. She now lies on her side in a little over 30 meters of water. This happened on 26 September 2000. This is uncomfortably recent and raw and, to be honest, I was not sure whether I wanted to dive the wreck. The respectful way in which the dive school discussed and approach the wreck persuaded me to head down.   Nonetheless, I had distinctly mixed emotions as I let the air out of my BCD and descended. This turned into a sick feeling in my stomach as I first glimpsed her giant dark shadow emerging from the depths. Coming closer, it was the details which really struck me. Funnels, railings, the name on her side. Despite the light covering of green gunge – plants and invertebrates inevitably colonise wrecks – she didn’t look aged. It felt all too present. Being a regular traveller on boats across the Aegean, it felt too close to home. 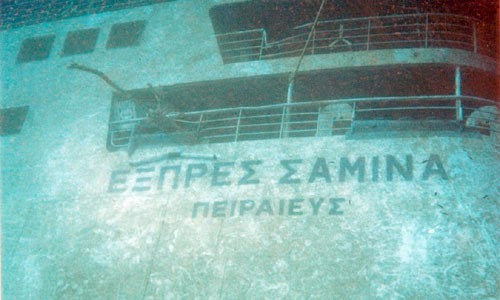 At our bottom depth, we reached the rear of the ship and the entrance to the car deck. The door lay open, allowing entrance to a large metal chasm. We entered. To the front, our torches illuminated little due to the size and emptiness of the space. Below was another matter. All too clear to see were the largely intact wrecks of cars and lorries. Very raw.   Exiting back out the car door, we made a long slow pass to one side, within touching distance of her exposed deck. Lines of deck seating covered in stringy-green gloop, windows intact, doors lying open. Worst of all, lifeboats never launched. Limited on time due to the depth, we ascended and made a final close-in pass over the top. Then slowly back to the surface, leaving the Samina where she lies. From a purely diving perspective, the MSS Express Samina is a fascinating and significant site to dive. Circumnavigating her, the diver in me was drawn in by all the possibilities of exploring the wreck. The naturalist in me was amazed by how much sea life had inhabited her in such a short space of time – an emerging oasis in an all too barren sea. The father, husband, son and brother in me wanted nothing to do with her, aghast by the tragedy of it all. Mixed emotions, but a dive I won’t forget. (NB – Thanks to Blue Island Divers for the pictures…)