While a few weeks diving was great, I found getting to grips with what it means to work in a dive shop and start on the ladder to being a dive professional equally engaging.
There is the practical stuff, like fitting people up for gear, setting up the boat, filling tanks and the ritual post-dive dunking of gear to remove salt… and piss. Then there is the people stuff, explaining what the local diving has to offer, escorting divers around the sub-aqua sites, giving pre-dive plan summaries (I only did this right at the end of my time) and generally trying to make the diver trip experience as pleasant as possible. Inevitably, there is also the admin stuff, which seems to gobble up more permanent staff/owner time than everything else put together. Thankfully, as a short term DMT (Divemaster Trainee for the uninitiated), I was safe from the admin on this occasion. 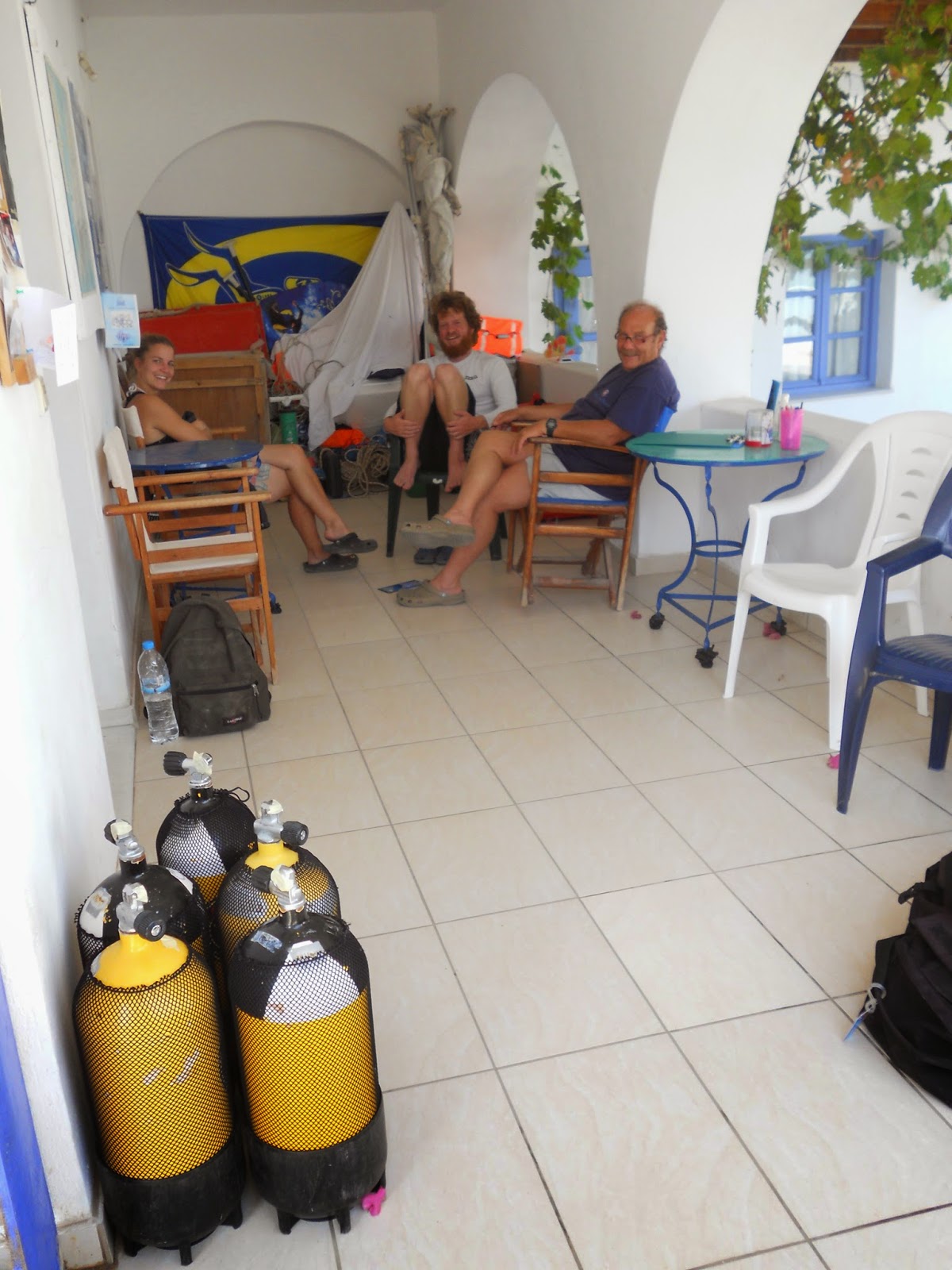 Finally, there is the teaching or, strictly speaking as a DMT, assisting others’ provision of instruction. This is the part I found the most interesting and enjoyable. During my Divemaster, I helped with pool sessions, OWT (Open Water Training) dives, refreshers, snorkel courses and discovery dives. A wonderful combo of sharing knowledge, calming nerves and invoking excitement in what diving has to offer. 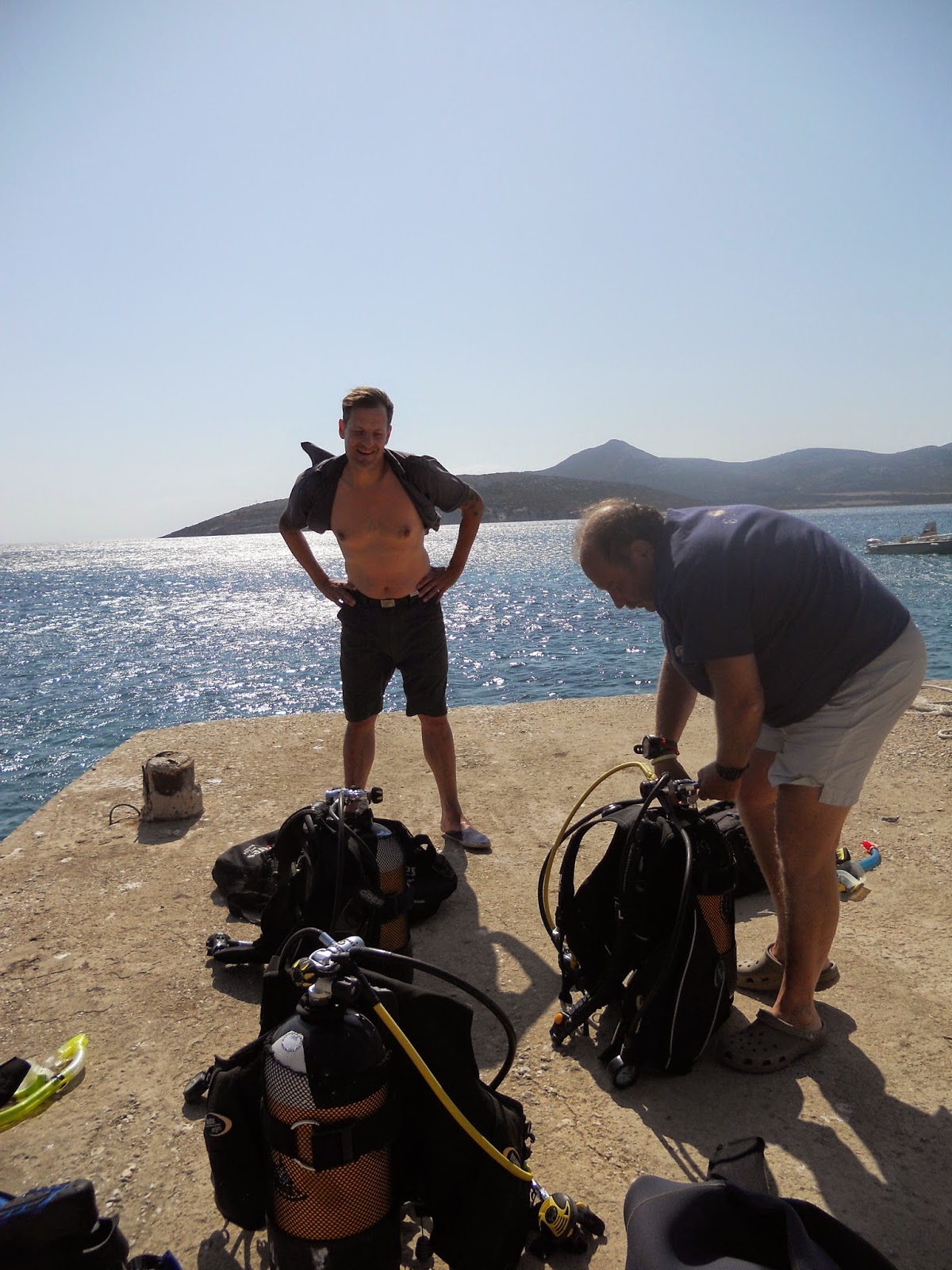 While most of this was straight forward, on my last day as a DMT I was given a stark reminder of the responsibility that comes with working as a dive professional.

MORE THAN A REFRESHER
The task at hand seemed simple enough. A qualified diver was looking for a refresher, having had a prolonged break from diving. Yes, his demeanour was slightly odd and stuttering, but he seemed like a nice, competent person. We drove across the island to Agios Giorgos, did a refresh of diving skills and set up our gear. The sea was calm, conditions clear. All good so far. We entered the water. 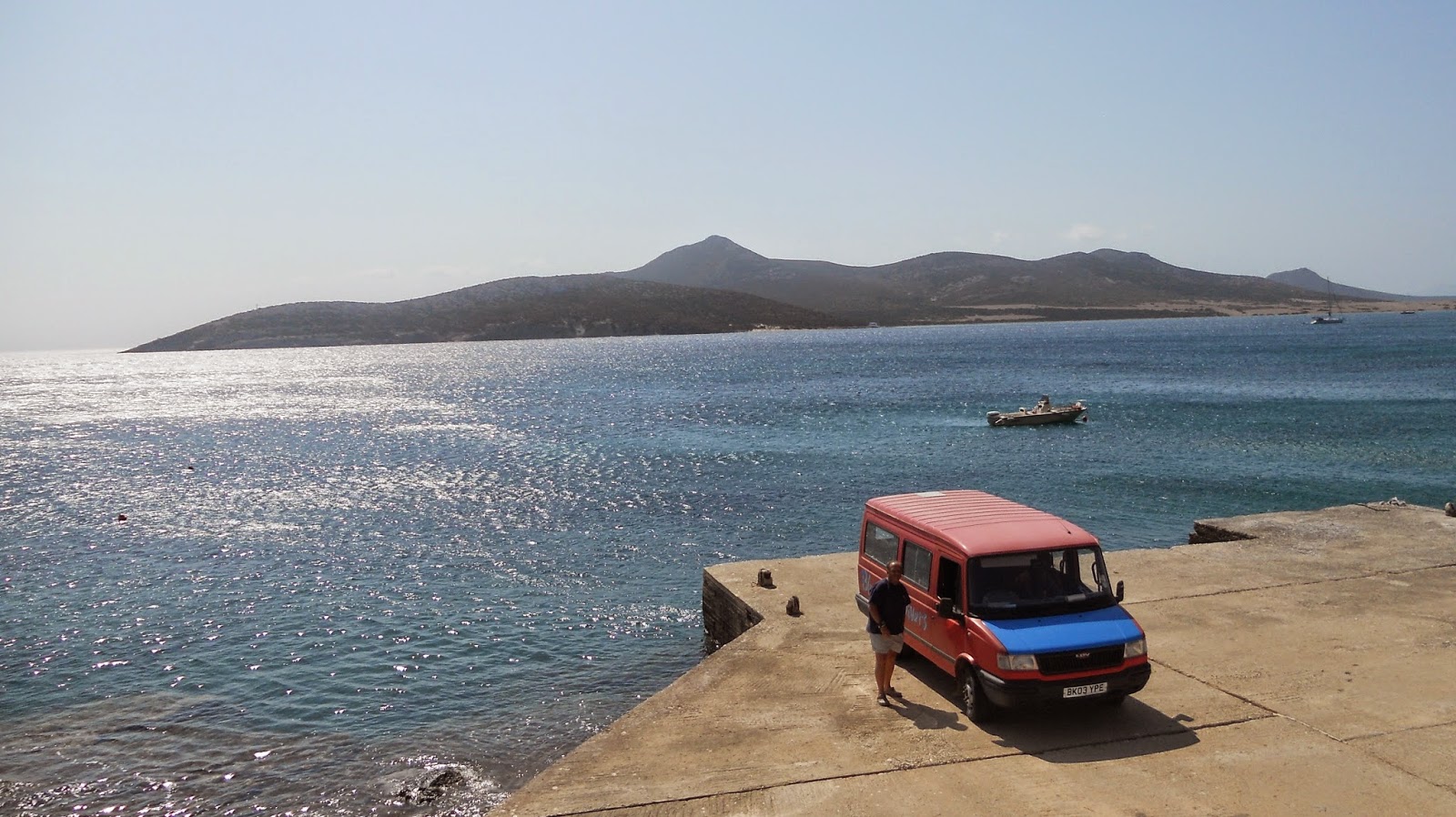 We prepped at the surface, signalled to dive and submerged.  I assisted him to descend slowly and eventually settled down on the sandy bottom to continue the refresher skills. He managed with some, but struggled with others. Nothing strange in itself for someone who has not dived in a while, but there was something off which I could not quite put my finger on.
We moved off slowly for a circuit, Peter out front with the dive buoy and the refresher diver a short distance behind him. I positioned myself slightly behind and to the side. We had barely gone a few meters when he shot to the side, arms and legs flailing. I pursued him, grabbed his arm and signalled for him to slow down and follow Peter. He nodded calmly and we moved off again. A minute later he did the same thing, but this time bolting diagonally towards the surface. Again I pursued, managed to catch up with some serious fin strokes, took hold of his arm and settled him down.
From my limited experience, alongside heavy air usage, there are two main giveaways of a distressed diver: unnecessarily panicky movements and darting wide open eyes. He was displaying the first in droves, but the peculiar thing was that his eyes were serene, as if he did not realise he was doing anything out of the ordinary.
I signalled to Peter that something was pretty off. He had seen it too and we turned around back to towards our entry point. Just when I thought the refresher diver had found his comfort zone and buoyancy, he darted off again, more sharply upwards. As any diver knows, a golden rule of diving is to ascend slowly (rapid ascent risks various nasty gas expansion injuries). He was, though, shooting upwards at a ridiculous rate of knots, kicking and flailing his arms like a panicked swimmer. I reacted as quickly as I could, exhaled as I burst upwards, just managed to grab his leg before he broke the surface and bought us back down, dumping air from each of our BCDs (air fillable diving jacket).
As we slowly descended to 5 meters, I signalled for him to calm down and level off. Again his eyes were calm. I just did not get it. I kept a levelling hand on him for our safety stop and all the way in.
As we got out and put the kit away, Peter and I barely said a word to each other, but a shared look of “WTF” said it all. Again the refresher diver was acting as if nothing strange had happened. It was only when back at the shop and the refresher had left, that Peter told me that this was right up there with his oddest instructor experiences, and he has seen a lot. 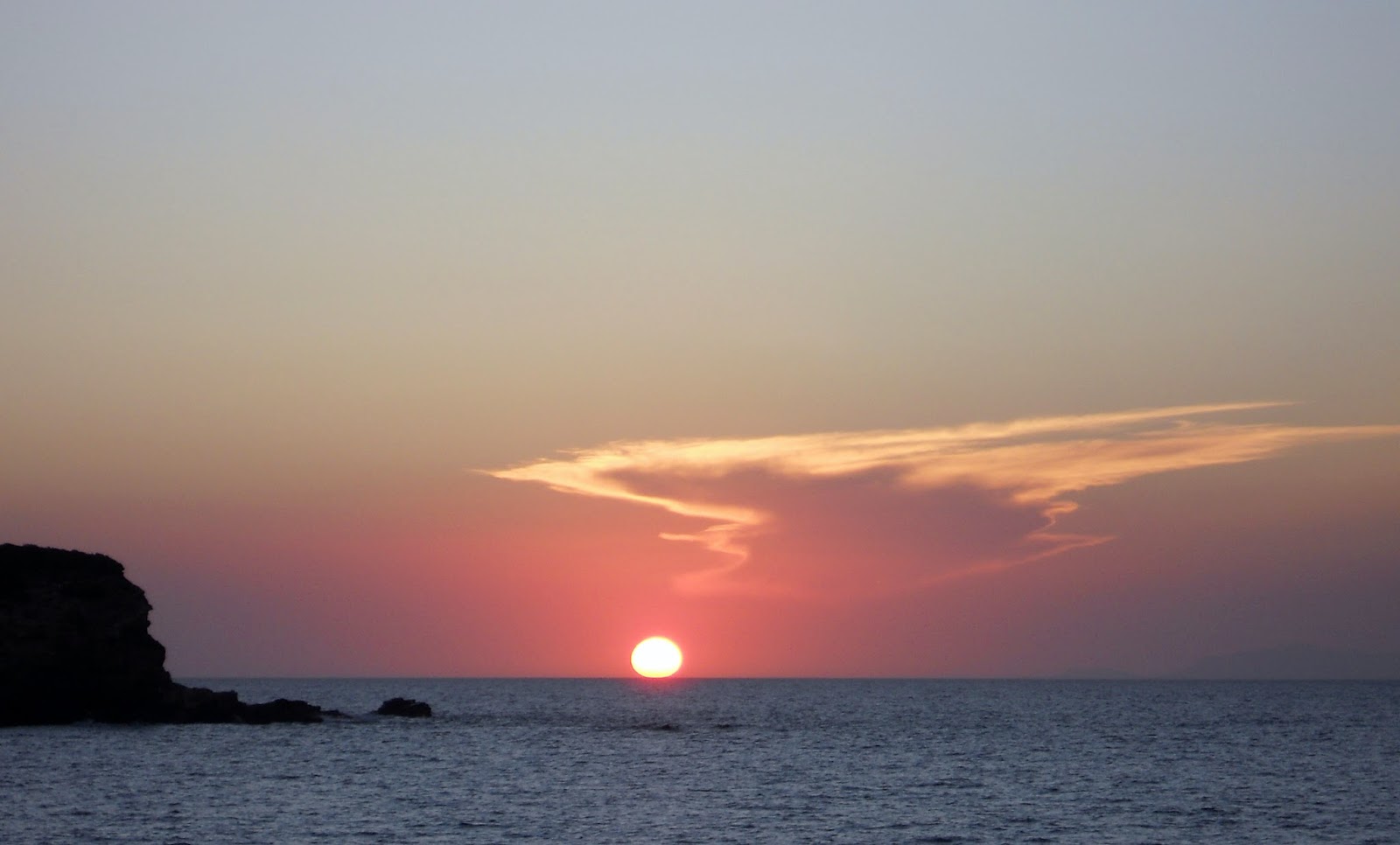 Diving is a statistically safe sport. When within dive limits and showing a bit of common sense, danger is at a minimum. I have dived with numerous types of poisonous, spiky, many-toothed creatures, in caves and wrecks, through tight swim-throughs, in violent currents and beneath heavy seas, but this was the dive which left me most on edge. It was a valuable lesson that the most dangerous thing to a diver is a diver.

DIVEMASTER AND BEYOND
So there you go. A strange way to finish, but I was now a Divemaster. I thoroughly enjoyed the course and my time with Blue Island Divers. Diving in Greece, while rarely spectacular, had exceeded my expectations. It left me with a real taste for more and desire to pursue my diving to the next level. The instructor course beckons… but not for a while, largely due to something (or, more accurately, someone) who quite rightly took up more of my time and attention on the island than diving. Welcome Nikolaki! 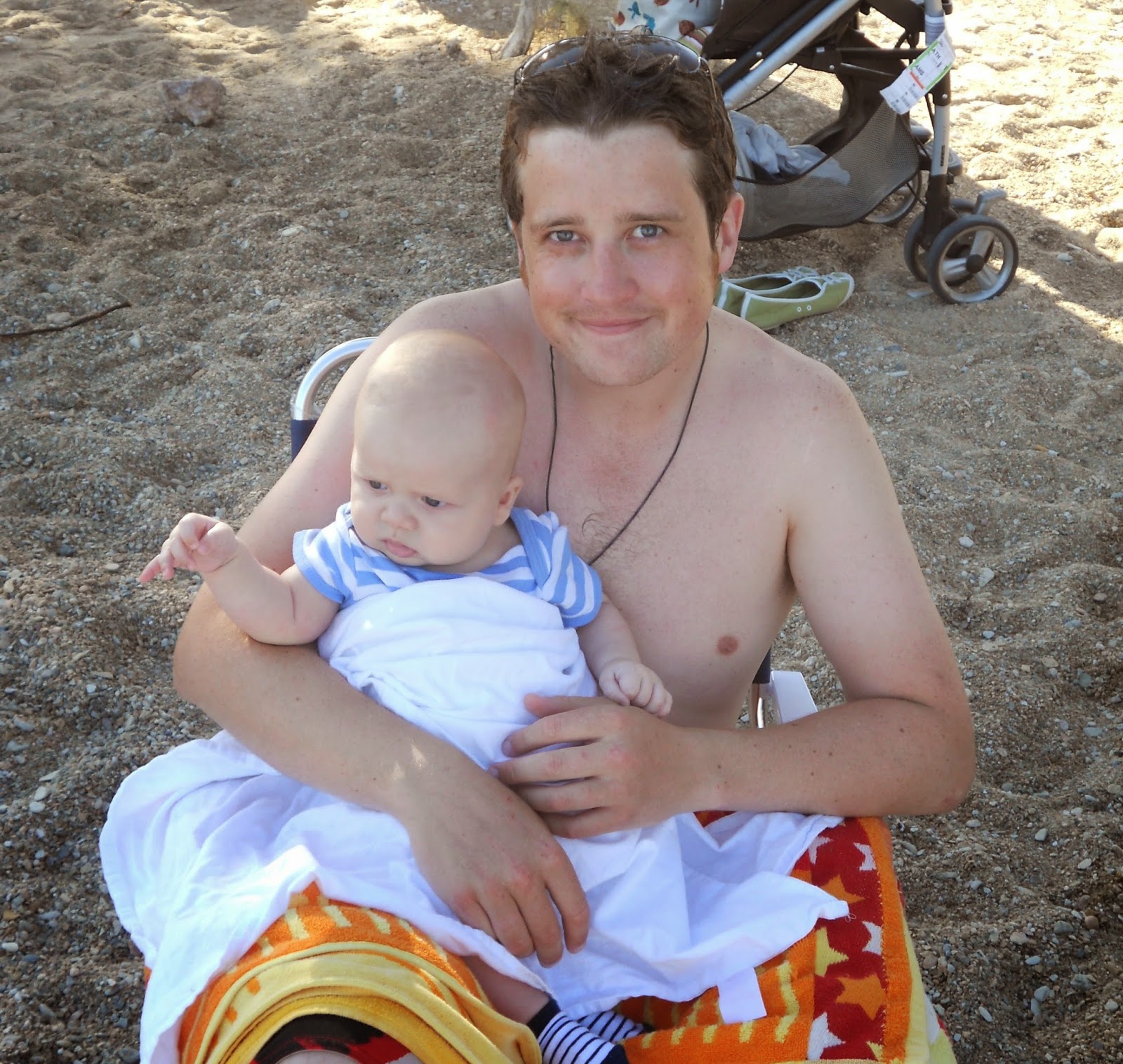